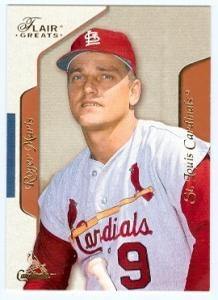 On May 9, 1967, Roger Maris hit his first National League home run as a member of the St. Louis Cardinals, he hit the long ball in the sixth inning off of Pirates hurler Woodie Fryman. Maris had his familiar number 9 on his back when he knocked the ball over the right field wall into seat 9, in section 9, on the 9th day of the month, at Forbes Field in Pittsburgh. Maris' jack helped the Cardinals win the contest 6-3. A fan named Andy Strasberg caught the ball, he had formed a friendship with Maris while he was with the Yankees, in 1963. Strasberg asked Maris for a bat and ball, Maris gave him the bat but told him he would have to catch the ball, Strasberg was able to do just that on this day in 1967. Maris' arrival in St. Louis in '67 was something that he treasured, the fans in New York had been merciless before and after he surpassed Babe Ruth's record. He had solid years after his historic '61 season but he also had years in which he just couldn't stay healthy, the media and fans alike scrutinized him as unreliable, the Yankees traded him to the Redbirds in December of '66. Even with his best days behind him he was well received in the Gateway to the West and he would be a key contributor to the Cardinals World Series Title in 1967. The '68 season proved to be his last, Maris and the Cards would end up in the World Series once again, only to lose it in 7 games. Maris' relationship with the Cardinals organization and the fans in St. Louis turned out to be a perfect way to end his career.

If you would like to read more about Roger Maris check out his bio here: http://sabr.org/bioproj/person/bf4690e9 the article mentions that he did return to New York in 1978 to raise the American League Pennant with his former teammate Mickey Mantle. The fans at Yankee Stadium greeted him with a warm welcome as they chanted "Roger" "Roger" "Roger", while it might not have erased the hard feelings he had from the past, it did help put them to bed.