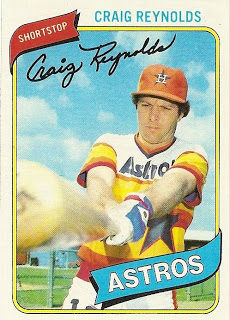 On May 16, 1981, at the Astrodome in  Houston, Astros shortstop Craig Reynolds tied a modern major league record when he hit three triples in a 6-1 win over the Chicago Cubs. Reynolds finished the strike shortened '81 season tied with Padres outfielder Gene Richards with 12 triples on the year. Since 1920 only 29 players have collected three triples in one game with the latest being Denard Span in June of 2010, take a look at the list here: http://www.baseball-reference.com/blog/archives/7025