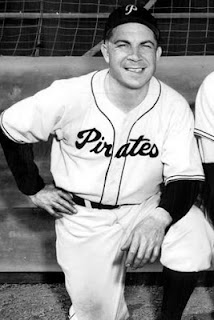 On May 14, 1950, behind a 6 for 6 performance by first baseman Johnny Hopp the Pirates crushed the Cubs 16-9 in the second game of a doubleheader at Wrigley Field.  Hopp sat out the first game, although he did get a pinch hit opportunity that amounted to nothing. The second game was one for the history books as Hopp hit 4 singles and two home runs as he collected 12 total bases on the day. Hopp was an All Star as a member of the Cardinals in 1945 and won three World Series rings with the Redbirds early in his career and another ring as a member of the Yankees later in his career. He played 14 years in the big leagues, posting a career .296 average with 46 long balls and 458 ribbies. While Hopp didn't put up Hall of Fame numbers he did join a pretty exclusive club on that Spring day in 1950.

Check out this list of men who have gone 6 for 6 in a game: http://mlb.mlb.com/mlb/history/rare_feats/index.jsp?feature=six_hit_game