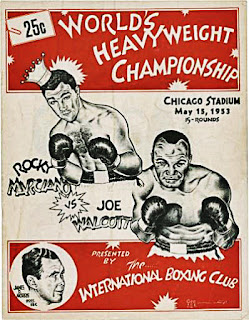 On May 15, 1953, Rocky Marciano knocked Jersey Joe Walcott out in the first round of a much anticipated rematch that had the World Heavyweight Title on the line. Marciano took the title from Walcott in September of  '52  in an epic battle that many thought Jersey Joe had yet to recover from. Marciano made quick work of him which might have been a tell tale sign that Walcott was ill prepared for the match. It proved to be the last fight in Walcott's career, he was 39 at the time. Walcott began his career in 1930, he worked his way through the ranks and finally got a shot at the title in 1947. Walcott's pursuit to being a champion was dashed 4 times, the fifth time was a charm as he finally won the belt in July of  '47, he was 37 years old at the time which made him the oldest title holder in the history of the sport until George Foreman won it at the age of 45 in 1994. After Walcott successfully defended his title one time he met his match in Marciano. After beating Walcott for a second time Marciano would successfully defend his title 5 times before he retired in 1956.

Watch the fight here: http://www.youtube.com/watch?v=wRvQ8UPOKpY
Posted by Wade Forrester at 12:10 AM