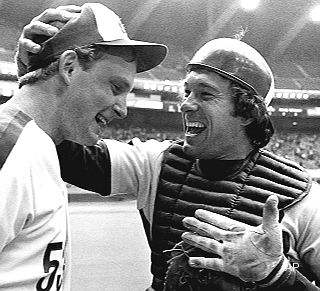 On May 10, 1981, Charlie Lea of the Montreal Expos became the first French born player to toss a no hitter. His masterful performance came against the San Francisco Giants at Olympic Stadium in Montreal. Behind the dominant pitching of Lea the Expos cruised to a 4-0 victory, the offense on the Montreal side of the ball was provided by second baseman Rodney Scott, center fielder Andre Dawson, and third baseman Tim Wallach. Lea's career was marred by injuries, he played 7 years in the majors posting a 62-48 record over that time. His shining moment came on that day in Montreal. Only three pitchers tossed no hitters for the Expos, Bill Stoneman did it twice in 1969 and 1972, and Dennis Martinez pitched a perfect game in 1991. In 2010 Lea was asked what he remembered about the final out of the game, it ended with a fly ball of the bat of Giants first baseman Enos Cabell. Lea said "It was a slider a little bit away from him,"  he went onto say, " I don't know if it was up or down but he hit it off the end, a little lazy fly ball to center. Dawson really didn't have to move out of his tracks. Andre was a fairly emotionless guy. When he caught it and and immediately threw his arms in the air and started jumping up and down, me seeing his emotion, it was something special." A special day it was for Charlie Lea and the entire Expos squad. In this picture he is celebrating his no hitter with his catcher Gary Carter.

Here is the box score from that day in Montreal: http://www.baseball-reference.com/boxes/MON/MON198105102.shtml
Posted by Wade Forrester at 7:25 AM