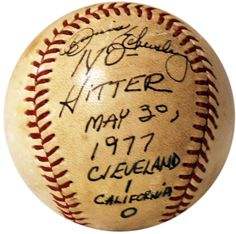 On May 30, 1977, in front of a home crowd in Cleveland, Indians hurler Dennis Eckersley struck out 12 Angels batters on the way to tossing the 200th no hitter in the history of Major League Baseball. The Indians won the game 1-0 with the only run coming in the first inning after Duane Kiper tripled then he was squeezed in by Jim Morris. Only two batters reached base for the Angels, Tony Salaita reached with a walk in the first, then Bobby Bonds struck out to open the eighth but reached first after the third strike was also a wild pitch. While Eckersley is best known as one of the best closers of his time, he was a solid starter early in his career. Eck won more than 150 games as a starter, including 20 games in 1978 while he was with the Red Sox. As a member of the A's in 1987, Eckersley went from the starting rotation to the bullpen, it was a move that earned him a plaque in Cooperstown.

Here's the box score from the contest: http://www.baseball-reference.com/boxes/CLE/CLE197705300.shtml

Posted by Wade Forrester at 7:51 AM