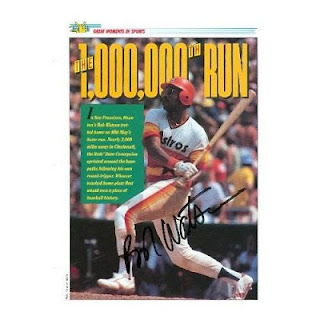 On May 4, 1975, at Candlestick Park in San Francisco, Houston Astros outfielder Bob Watson scored Major League Baseball's One Millionth Run. The historic run came after his teammate Milt May hit a three run shot with Watson standing at second base. Tootsie Roll had promised $10,000 and 1 million tootsie rolls to the player who recorded the historic run and they were tracking the runs on every scoreboard across the major leagues. Watson knew they were sitting on 999,999 when May conn ected and he hauled ass home. Meanwhile, in Cincinnati, Dave Concepcion hit a home run right as May hit his long ball, Concepcion crossed the plate four seconds after Watson so the prize went to the Houston Astros outfielder. Later calculations would prove that neither Watson or Concepcion scored the millionth run but it sure did sound like a fun day and I bet Bob Waston is sitting somewhere right now eating a tootsie roll.
Posted by Wade Forrester at 11:53 AM