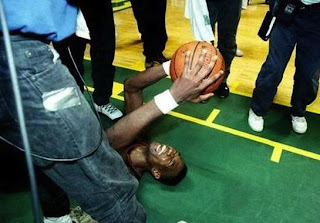 On May 7, 1994, the Denver Nuggets completed one of the biggest upsets in the history of the NBA. The eighth -seeded Nuggets took on the top-seeded Seattle Supersonics in the first round and nobody gave the Denver squad much of a chance, especially after they lost the first two games of the series in Seattle. With the Sonics thinking sweep, the Nuggets were not about to lay down. Behind the outstanding play of Dikembe Mutombo the Nuggets came storming back after winning back-to-back game sin Denver the series shofted back to Seattle. During the broadcast the announcers described it as a heavyweight boxing match as the game went back and forth. The fifth and final game would head to overtime before Denver completed the improbable upset by the score of 98-94. Dikembe Mutombo celebration at the end of the game was a classic moment as he laid on the floor with the ball over his head as tears of joy ran over his face. It was the first time a #8 seed had taken down a #1 and even though the Nuggets lost to the Jazz in 7 games in the next round, the team had made their mark in the history of the game.

Here is a great video that covered the series: http://www.youtube.com/watch?v=6XGt25SRmdg
Posted by Wade Forrester at 7:36 AM