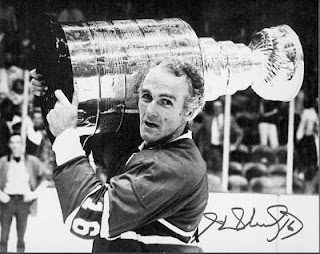 On May 5, 1966, the Montreal Canadiens took home the Stanley Cup by beating the Detroit Red Wings in 6 games. The series was a seesaw battle with Detroit taking the first two on the road before Montreal bounced back with two road wins of their own. The series shifted to Montreal and the Canadiens beat the Red Wings 5-1 for the only home win of the series. With their backs against the wall the Red Wings had home ice on their side in Game 6 but it wouldn't be enough. The two teams were tied up at 2 goals apiece at the end of regulation and overtime was where it would be decided. Just 2 minutes and 20 seconds into OT Henri Richard came flying in on net and the Red Wings goalie Roger Crozier lost his footing as Richard plowed into him as the puck just got passed the netminder. It was Richard's only overtime playoff goal of his hall of fame career and it couldn't have come at a better time. The Championship marked the 7th title for the Canadiens in 11 years, Richard was a member of everyone of those teams. Despite the loss the Red Wings goalie took home the Conn Smythe as the MVP of the playoffs. It was a great battle between two of the greatest teams in the history of the game.

Legends of Hockey Henri Richard: http://www.youtube.com/watch?v=o1Hydkkga3E
Posted by Wade Forrester at 11:44 AM