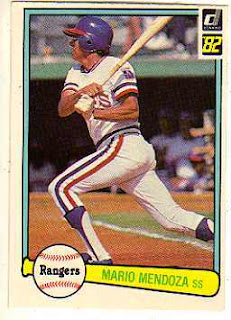 On May 22, 1982, in his last big league at bat, Texas Rangers shortstop Mario Mendoza reached first base on a fielders choice. Mendoza struggled to crack the .200 mark throughout his career which led to some teammates giving him some grief by calling it  "The Mendoza Line". The term stuck and would eventually become a part of popular culture after several well recognized names such as George Brett and Chris Berman used it. Mendoza played for 7 more seasons in the Mexican Pacific League and would become a manager after his playing days ended.

If you would like to read more about Mendoza check this out: http://www.baseball-reference.com/bullpen/Mario_Mendoza
Posted by Wade Forrester at 7:41 AM