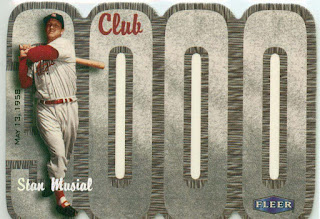 On May 13, 1958, Stan Musial collected the 3,000th hit of his career during a 5-3 win over the Cubs at Wrigley Field. Musial was left out of the starting lineup so that he could accomplish he historic feat in front of the hometown fans in St. Louis. However, with the Cubs leading 3-1 and a runner on second base in the sixth inning, Fred Hutchinson called on Musial to pinch hit. Musial responded with a run scoring double off of Moe Drabowsky. The umpires halted the game to award the ball to Musial, who was lifted for a pinch runner. The next day Stan and the Redbirds were back home and the Cardinals honored him with a pregame ceremony to celebrate his 3,000th hit, once they started playing ball Musial immediately picked up hit #3,001 by parking a ball over the fence in the first inning, then later in the game he added another single as the Cards beat the Giants 3-2 at Busch Stadium. Musial entered the 1958 season needing 43 hits to reach 3,000 and he got there in a hurry with 46 hits in is first 92 at bats. He finished the season with a .337 average and 17 homers.

Posted by Wade Forrester at 7:56 AM