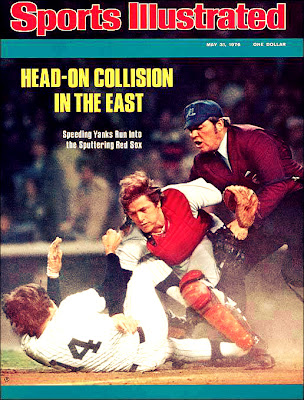 On May 20, 1976, the Yankees and the Red Sox had one of the ugliest brawls in the history of the rivalry. The Red Sox came into Yankee Stadium trailing the Bronx Bombers by 6 games in the standings and had a four game set with their rival in front of them. The pressure was high on the Boston club who had taken the American League Pennant the year before and this series was a big one. Bill "Spaceman" Lee was on the bump for the Sox and he was cruising until the sixth inning, that's when the shit hit the fan. The Yankees held a 1-0 lead at that point and were battling for some more runs. Lee was battling as well, he hadn't struck a man out but he was getting key outs up until that sixth inning. The Spaceman recorded two quick outs then Lou Piniella came to the plate and singled to left. Graig Nettles picked up another single, which put Piniella in scoring position. Up next batter Otto Velez singled to right which sent Piniella flying around third as he hoped to tack on another Yankee run. As Pinella headed home Red Sox right fielder Dwight Evans snatched up the ball and gunned him down. Piniella came into home hard on Carlton Fisk which set the whole thing off. Piniella and Fisk went at it, Lee and Velez squared off then Mickey Rivers clocked Lee before Nettles slammed the Red Sox hurler to the ground. Lee attempted to go after Nettles but he had injured his shoulder in the melee and was rocked by Nettle's once again. Lee was beaten and bruised and the shoulder injury would keep him out of the rotation until September. The Red Sox won the game 8-2, however, the Yankees went onto win the AL Pennant then would fall to Pete Rose and The Big Red Machine in the World Series. The fight at Yankee Stadium simply marked another fiercely competitive moment between the two teams that many will always consider to have the best rivalry in all of baseball.

Watch footage of the  brawl here: http://www.youtube.com/watch?v=PkU2TH7-eLw
Posted by Wade Forrester at 12:30 AM