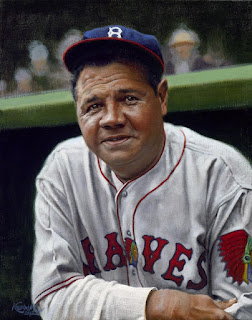 On May 25, 1935, as a member of the Boston Braves, Babe Ruth hit the last three home runs of his career. The Braves were wrapping up a three game series against the Pittsburgh Pirates when the legendary slugger went off at the plate one last time. Ruth's 714th long ball sailed up and over the 86 foot high upper deck in right field, it was the first home run to ever leave the yard at Forbes Field in Pittsburgh. Despite Ruth's monster day the Braves lost the contest 11-7, just 5 days later Ruth's playing days came to an end. Ruth spent 22 years in the big leagues, he retired as the all time home run king, the record would stand until Hank Aaron took the title in 1974.  The career of Babe Ruth almost defines the word remarkable, he was a 7 time World Series Champion, he carried a career .342 average, won the AL Home Run Crown 12 times and also led the league in ribbies 6 times, can't forget to mention his pitching record was 94-46.  When it comes down to it, that is just naming a few things that Ruth accomplished in his great career.

The artwork was done by Graig Kreindler, in my opinion he is one of the best artists out there. Check out his Facebook Page: https://www.facebook.com/GraigKreindler
Posted by Wade Forrester at 8:50 AM