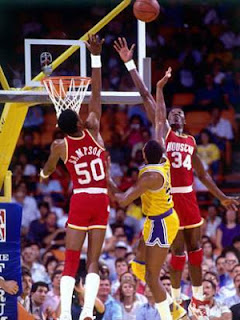 On May 21, 1986, with one second on the clock, in Game 5 of the Western Conference Finals, Houston Rockets Big Man Ralph Sampson caught an inbound pass, spun around, and nailed the game winning shot as time expired. The shot gave the Rockets a 114-112 victory and kept the L.A. Lakers out of The Finals for the only time in a span of 8 years that ranged from 1982 to 1989. The Rockets would fall to the Celtics in The Finals in six games but Sampson provided a memorable playoff moment that was ultimately the highlight of his professional career.