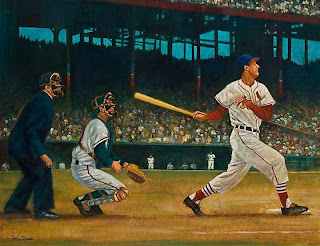 On May 2, 1954, at Sportsman's Park in St. Louis, Stan "The Man" Musial hit 5 home runs in one day, as the St. Louis Cardinals took on the New York Giants in a doubleheader. In the first game he hit a solo shot in the third, a two run shot in the fifth, then a three run shot in the eighth. The homer in the eighth put his Redbirds up 9-6 and would prove to be the game winner as the team prevailed 10-6. In the second game the Cards scored 3 runs in the first before a huge fourth inning by the Giants turned the momentum, as they scored 8 runs. Musial's fourth homer of the day came in the fifth after a lead off triple by Red Schoendienst, the two run bomb to right, cut the score to 8-6 and Musial wasn't done. He hit his fifth and final home run of the day in the seventh to pull the Cards within one but it just wasn't enough as the Giants held onto win the game 9-7. Stan was 33 years old when he accomplished this historic feat. He was the only player to hit 5 home runs in doubleheader until it was matched by San Diego Padres first baseman Nate Colbert in 1972. Colbert was born and raised in St. Louis and he was in the stands when Musial made history, 18 years later he would join his childhood hero as the only two players to park 5 balls over the fence in one day.

Here are the box scores from Musial's historic performance: http://www.baseball-reference.com/boxes/SLN/SLN195405021.shtml
Posted by Wade Forrester at 7:31 AM