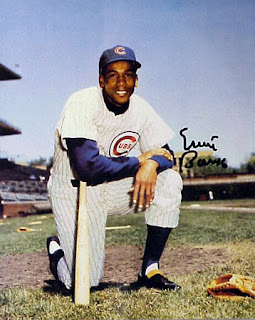 On May 12, 1970, at Wrigley Field in Chicago, Ernie Banks hit the 500th home run of his career. The historic big fly was served up by Atlanta Braves hurler Pat Jarvis. It would take 11 innings to decide a winner in the contest as the Cubs outlasted the Braves to win 4-3. The man who had became known as "Mr. Cub" hit his first long ball in September of 1953, he would finish his career with 512 homers. Banks spent all 19 years of his career with the Cubs, from '53-'61 he played the shortstop position, in that time he hit 277 home runs, at the time of his retirement he held the record for most home runs by a shortstop. Banks moved to first base in 1962 where he would play until his career came to a close in 1971. Banks was the ultimate professional, he had a true love for the game, and a personality that made people love him. The 14 time All Star was elected to the Baseball Hall of Fame in 1977, it was his first time on the ballot.

Posted by Wade Forrester at 9:50 AM