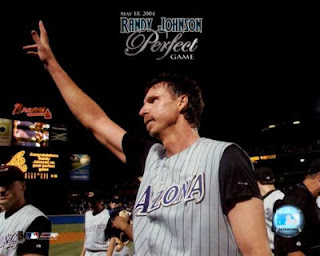 On May 18, 2004,  in a 2-0 win over the Braves in Atlanta, 40 year old Arizona Diamondbacks hurler Randy Johnson became the oldest pitcher to throw a perfect game. The previous record was held by Cy Young who did it at the age of 37 in 1904. The Big Unit struck out 13 as he became the 17th pitcher to toss a perfecto in the history of Major League Baseball.  As of 2012 only 23 men have achieved perfection, 21 of those games came after the modern era began in 1900.

Check out the list of men that have achieved perfection:  http://mlb.mlb.com/mlb/history/rare_feats/index.jsp?feature=perfect_game
Posted by Wade Forrester at 9:16 AM