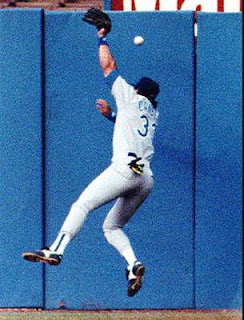 On May 26, 1993, one of the funniest plays in the history of Major League Baseball happened in Cleveland, Ohio. The Texas Rangers were in town to take on the Indians and it looked like all was going well for the Texas squad as they held a 3-1 lead headed into the bottom of the fourth inning, then Jose Canseco's head got in the way. Carlos Martinez was the first batter for the Indians and he sent a long one into deep right, Canseco ran back to the wall, reached up to make the catch then the improbable happened, the ball barely caught Canseco's glove then hit him right square in the head and bounced over the wall for a home run. From there the wheels fell off the bus for the Rangers and by the end of the inning they were trailing 4-3.  By the end of the sixth the Indians were up 7-3. The Rangers would make it a game by scoring a run  in each of the last three innings but it wouldn't be enough and they lost the contest 7-6. In the end the box score didn't matter as much as the play off of Canseco's monster head.

Watch The Video Here: https://www.youtube.com/watch?v=DLs0pjWnzTY
Posted by Wade Forrester at 3:24 AM