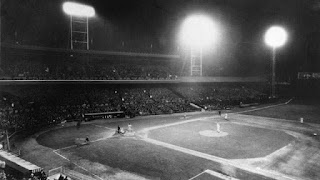 On May  24, 1935, the Cincinnati Reds hosted the Philadelphia Phillies in the first ever Major League Baseball game to be played at night under the lights. More than 25,000 fans showed up to watch as President Franklin D. Roosevelt flipped a switch in Washington as the lights kicked on. Throughout the 30's and 40's most teams around the league installed lights and before long just about every stadium would have them. Wrigley Field in Chicago, the second oldest stadium in the league after Fenway Park in Boston was the last stadium to play a game under the lights, it wasn't until August of 1988 that the Cubbies played a night game on the North Side.

The link provided has a lot of great quotes, pictures, and facts from the historic night in Cincinnati: http://www.crosley-field.com/FNG/
Posted by Wade Forrester at 7:22 AM