May 29,1993: Gretky Lights the Lamp 3 Times In Game 7 Of The Campbell Conference Finals 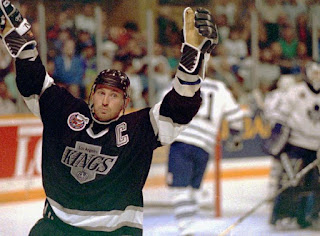 On May 29, 1993, L.A. Kings superstar Wayne Gretzky lit the lamp 3 times in a 5-4 win over the Toronto Maple Leafs in Game 7 of the Campbell Conference Finals. The Great One's hat trick was the eighth time he scored 3 or more in a playoff game and it broke a playoff record. Not only did it break a record it punched a ticket to The Stanley Cup Finals  for L.A. They lost to Montreal in the Finals but the way they got there would not be forgotten. Before it was all said and done Gretzky recorded two more playoff hat tricks to set the mark at 10, it is a record that might never be touched. There was a reason he is known as The Great One.