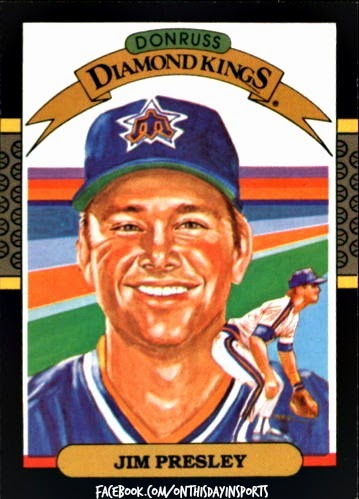 On April 8, 1986, with a reported 42,121 fans in the stands at the Kingdome in Seattle, Jim Presley led the Mariners to a dramatic 8-4 Opening Day win over the Angels. The Mariners came into the bottom of the ninth trailing 4-2 before Presley tied it up with a two-run shot off of Donnie Moore that sent the game into extras. In the bottom of the tenth Presley came to the plate with the bases loaded and crushed a walkoff grand slam to win the ballgame.

The Angels looked like they were going to roll to victory after Bobby Grich led the game off with a home run. Three batters after the long ball by Grich, Reggie Jackson hit a two run shot. Gorman Thomas put the Mariners on the board with a bomb in the fourth, and they picked up another run in the fifth. Seattle's starting pitcher Mike Moore ran into real trouble in the seventh when he hit a man with the bases loaded to extend the Angels lead to 4-2.  Then came the heroics by Presley that sent the fans home happy.

Presley spent 8 years in the big leagues; six of them with the Mariners. In that time he hit .247 along with 135 home runs. 89 of the homers came during a three year window that began in '85 when he hit 28. He followed that season up with 27 in '86 with the first two coming on Opening Day, and hit another 24 in '87. From there his numbers tapered off a bit, but he did swing the stick for several more years. When his career came to a close he turned his attention to coaching. He is currently the hitting coach for the Baltimore Orioles. While Presley's career is not one that led to Cooperstown, it was a career that came with many great memories, which included two bombs on Opening Day in 1986.