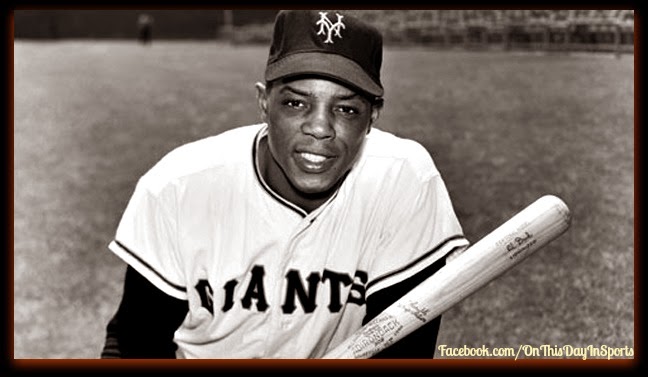 On April 13, 1954, a sixth inning 425 foot bomb off the bat of Willie Mays led the Giants to a 4-3 win over the Brooklyn Dodgers on Opening Day at the Polo Grounds in New York. Mays had missed the entire '53 season while serving in the military and made it be known that the Giants were going to be a team to reckon with. Coming into the game the Brooklyn club was picked as the odds on favorite to win repeat as Champions of the National League. Mays and company had other ideas as they took the National League Crown by 5 games in what was an MVP campaign for Mays. The Giants then went onto win the World Series.

The big fly by Mays was the fifth of the contest. The Dodgers catcher Roy Campanella led the second inning off with a solo shot, watched the lead disappear in the third when Alvin Dark hit a two-run dinger. Campanella responded with another solo shot t lead off the fourth. The score stayed knotted at 2 until Hank Thompson gave one a ride into seatland in the bottom of the fifth to give the Giants a 3-2 edge. It was an edge that didn't last long. In the bottom of the sixth, Gil Hodges plated a run with a sac fly and once again the game was tied. This simply set the table for Mays who led the sixth off with his bomb.

All the runs were charged to Carl Erskine, who at the time owned the World Series strikeout record with 14. It just wasn't his day. He did complete the inning before being replaced by Clem Labine, while Sal Maglie held onto the lead for the Giants. Maglie didn't make it easy. In the seventh he retired one man before loading the bases. Marv Grissom took over on the bump and was able to retire both Duke Snider and Jackie Robinson in succession. It was the biggest threat as Grissom held the Dodgers in check until the final out was recorded.