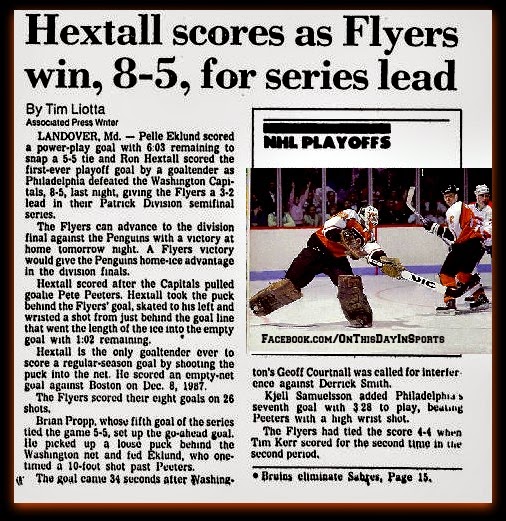 On April 11, 1989, Philadelphia Flyers netminder Ron Hextall became the first goalie to score a goal in an NHL playoff game, when he sent the puck flying into an empty net to cap to off an 8-5 victory over the Washington Capitals in Landover Maryland.  In 1997, New Jersey Devils goalie Martin Brodeur joined Hextall in the exclusive club when he scored against the Montreal Canadiens in another first-round. The victory gave the Flyers a 3-2 advantage in the series, and they would go onto win the next game, then knock the Penguins out in a seven game battle before meeting the Montreal Canadiens who knocked them out in six games in the Conference Finals.

Watch history be made here:
https://www.youtube.com/watch?v=2PLa3q9V9j4