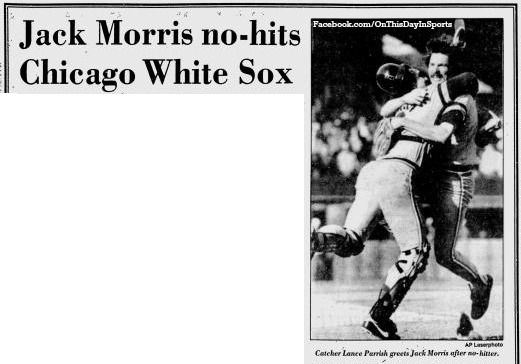 On April 7, 1984, Jack Morris of the Detroit Tigers no-hit the White Sox at Comiskey Park in Chicago. The Tigers prevailed 4-0 as Morris became the first Tigers pitcher to achieve the feat since 1958 when Jim Bunning no-hit the Red Sox in Boston. The no-hitter for Morris was the only one of his legendary career that included 254 wins, 5 All Star appearances, 4 World Series rings, and a World Series MVP award.

Chet Lemon gave Morris all the offense that would be needed with a two run shot in the 2nd, and in the top of the fifth Lou Whitaker and Kirk Gibson added a couple of more runs to the board with a pair of RBIs. When the bottom of the fifth inning rolled around Morris realized that he had not allowed a hit. He said that a turning point came one inning earlier when he walked the bases full before inducing Greg Luzinski into an inning-ending double play. Morris acknowledged that he didn't have his best stuff that day, saying that he didn't think he had ever carried a no-hitter past the fifth inning.

While the no-no had creeped into his mind, Morris stayed locked in and was delivering a split-finger fastball that could not be touched. In the eighth, first baseman Dave Bergman who had just been acquired via trade made two spectacular plays to preserve the no-no. Bergman hadn't stepped on the field until the seventh when he came in as a defensive replacement; needless to say he earned his paycheck that day.

Morris walked the first batter he faced in the seventh. He said he was more nervous in that inning than he was in the ninth. After the eighth some fans at Comiskey were leaning over the rail yelling "Hey Morris you got a no-hitter going" in an attempt to jinx him. Morris laughed about it, and it might have even loosened him up as he headed into the final frame. Before he took the field Morris told his pitching coach Roger Craig "I'm going to get it", and get it he did.

The first man Morris had to face in the ninth was the always dangerous Carlton Fisk. he said that he wasn't all gung-ho on pitching the no-hitter until he was able to sit Fisk down with a forkball that was grounded out to Bergman at first. Then the adrenaline kicked in; he was two outs away from making history. His next victim was Harold Baines who smashed one right back at the pitcher, Morris knocked it down, then gunned it over to first. One more out. Morris followed the out by Baines by giving up a walk to Greg Luzinski on a 3-2 pitch that many thought should have been a strike. It didn't matter after Morris struck out Ron Kittle on his 120th pitch of the ballgame. As his catcher Lance Parrish rushed to the mound to hug Morris history had been made during what would be one truly historic season for those Detroit Tigers.

Morris struck out eight and walked six in the contest. You can check out the box score here:
http://www.baseball-reference.com/boxes/CHA/CHA198404070.shtml
Posted by Wade Forrester at 1:09 AM