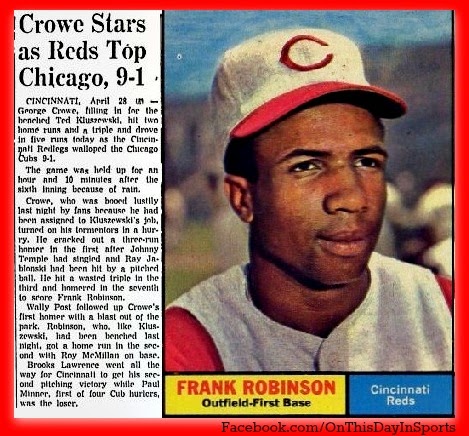 On April 28, 1956, Frank Robinson of the Cincinnati Reds hit the first home run of his career during a 9-1 victory over the Chicago Cubs in front of a home crowd at Crosley Field. The future Hall of Famer hit 586 home runs.in a career that spanned over 21 years. 324 of them came in a Reds uniform. The first pitcher to give up a dinger to Robinson was Cubs hurler Paul Minner. Robinson teed off on the Cubs 54 times in his career, making them his number one victim. The Braves were in a close second as he parked 53 balls over the wall while facing them. The game in which Robinson did his first homerun trot was a wild one as George Crowe filling in for a benched Ted Kluszewski. Crowe hit two home runs of his own, and added a triple to the mix on the way to knocking in 5 runs on the day.

Check out Robinson's homerun log here:
http://www.baseball-reference.com/players/event_hr.cgi?id=robinfr02&t=b
Posted by Wade Forrester at 12:40 AM