April 21, 1944: Kreevich Blasts Two as He Leads The St. Louis Browns To Victory 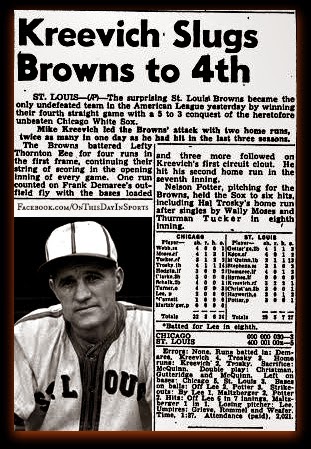 On April 21, 1944, St. Louis Browns centerfielder Mike Kreevich came up with some unexpected power as he blasted  two home runs in a 5-3 victory over the Chicago White Sox at Sportsman's Park in St. Louis. Kreevich had not hit a long ball in 297 games before he came up with the two big bombs that led the Browns to victory.  He finished that year with a .301 batting average and 5 homers for the club who would play the St. Louis Cardinals in the Fall Classic.

The victory was the fourth of nine consecutive victories that the Browns opened the season with. They bested that winning streak by winning 10 in a row from July 28th to August 10th. As a native St. Louisan it seems like the Browns are a forgotten team as their era came and went. I have always thought about how great it must have been to have them in the city, especially during that '44 campaign that featured both of the St. Louis clubs.

Check out the box score here: http://www.baseball-reference.com/boxes/SLA/SLA194404210.shtml
Posted by Wade Forrester at 2:19 AM