April 20, 1948: George Vico Parks The First Pitch He Sees In The Majors In The Seats 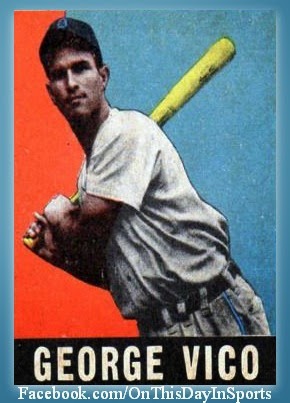 On April 20, 1948, Detroit Tigers first baseman George Vico became just the 19th player in the history of Major League Baseball to hit a homerun on his very first pitch in a 5-2 Opening Day victory over the White Sox in Chicago. Vico who was in the seven hole, hit his historic homer to lead off the third frame, which started the scoring on the day. The Tigers added to their lead with a run in the seventh, before the Sox battled back with a run in the seventh, then another in the eighth. The table was set for huge three run inning by the Tigers which included an RBI by their pitcher Hal Newhouser who earned a complete game victory. Vico spent just two years in the majors. He hit 12 home runs total. That first one put him in a club that will guarantee he is remembered for accomplishing a feat that is a rarity to say the least.

Check out the box score here: http://www.baseball-reference.com/boxes/CHA/CHA194804200.shtml
Posted by Wade Forrester at 4:14 AM