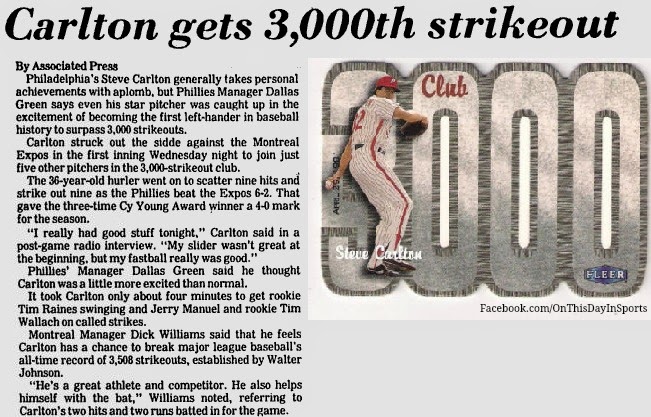 On April 29, 1981, Philadelphia's Steve Carlton became the first left-handed pitcher to record 3,000 strikeouts. The milestone in the first inning of a 6-2 Phillies win over the Montreal Expos, before a crowd of  30,142 at Veteran's Stadium in Philadelphia. Carlton came into the game three strikeouts away from making history and he struck out the side in the first to reach it. Tim Wallach was his 3,000th victim. From there he scattered nine hits as his Phillies rolled to victory. To date, Carlton has only been joined by Randy Johnson in the 3,000 strikeout southpaw club. Carlton finished his career with 4,136 K's, and he found his place in Cooperstown in 1994.

16 men are on the elite list of men to record 3,000 strikeouts. Carlton is currently ranked fourth on that list. Check it out here: http://mlb.mlb.com/mlb/history/milestones/index.jsp?feature=three_thousand_k

Check out the box score here: http://www.baseball-reference.com/boxes/PHI/PHI198104290.shtml
Posted by Wade Forrester at 1:50 AM