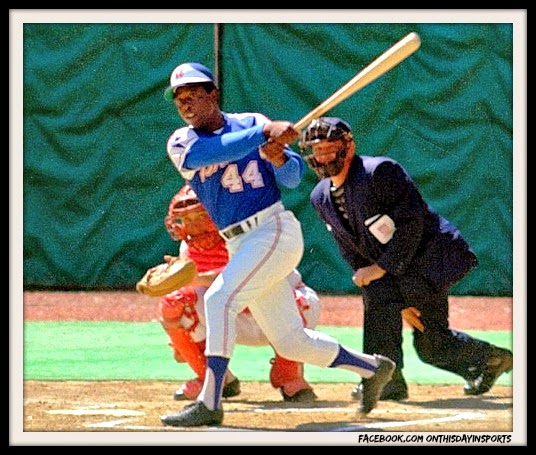 On April 4, 1974, with 52,154 fans in the stands at Riverfront Stadium in Cincinnati, Ohio, Hammerin Hank Aaron got a hold of the 714th home run of his career. Aaron's historic shot that had equaled Babe Ruth's record that had stood for 40 years, came in his first at-bat of the season with two men on in the first inning to give Atlanta a quick 3-0 lead.  It came on a 3-1 pitch that was served up by Reds hurler Jack Billingham that Aaron parked right past the 375 sign on the left field wall. With 714 flashing on the scoreboard, and the crowd in Cincinnati giving him a standing ovation, Aaron trotted around the bases and right into the record books. Four days later, in front of a home crowd in Atlanta, Aaron surpassed the Babe, and became baseball's all-time home run king.

The game was interrupted for six minutes following the blast as Aaron was congratulated by Vice president Gerald Ford, Baseball Commissioner Bowie Kuhn, and Bill Bartholomay, the board chairman of the Braves organization. A grateful Aaron expressed his thanks before saying "I'm just glad it is almost over with." Aaron would go onto score another run in the fifth inning which tied Willie Mays' record of runs scored on the all-time runs scored list.

It looked like the Braves were going to run away with this one as they had built up a 6-1 fifth inning lead before the Reds started to rally. Dave Concepcion's solo shot in the bottom of that fifth inning cut the lead to 6-2, then a three-run shot off the bat of Tony Perez in the eighth put the score at 6-5. With two out in the ninth, George Foster got on with a pinch hit single before Pete Rose doubled him in to tie the ballgame. Extra innings was going to decide this one. Rose was the hero once again in the 11th as he picked up a two-out double off Buzz Capra, who then threw a wild pitch that got passed catcher Johnny Oates and ended up near the dugout as Rose came wheelin around to score the game winning run. Sounds like one helluva game. A truly historic milestone that was followed by an epic comeback on Opening Day in Cincinnati.

Aaron finished his career with 755 long balls. His record stood until 2007 when Barry Bonds surpassed it on his way to the current record of 762. Many, including me, look at Aaron as the true Home Run King, as he did it the right way without any performance enhancers. Aaron was a model of consistency that worked hard year after year to achieve what he did. 733 of his 755 dingers came with a Braves uniform on. His first 12 years in league, the team was stationed in Milwaukee. At the age of 23, Aaron and the Braves won the World Series. Before the Braves left Milwaukee the '65 season, Aaron had crushed 398 home runs. Over the next nine year in Atlanta he hit 335 more before returning to Milwaukee as a member of the Brewers in 1975. He played two more years, and hit 22 more home runs before calling it a career. The man who had once came in for an injured Bobby Thomson during a Spring Training contest was now a legend in the game. His first home run as a major leaguer came in St. Louis on April 23,1954 against the Cardinals' Vic Raschi, his last came on September 14, 1975, against Spaceman Bill Lee as the Brewers battled the Red Sox in Boston. It was the end of a legendary career that will forever be celebrated at the Hall of Fame in Cooperstown, New York.

You can look at Aaron's career numbers and list of accomplishments here: http://www.baseball-reference.com/players/a/aaronha01.shtml