April 14, 1969: The Expos Take Down The Cards In Their Inaugural Home Opener

On April 14, 1969, a regular season Major League Baseball game was  played on foreign soil for the first time as the Montreal Expos kicked off their home schedule at Jarry Park with an exciting  8-7 victory over the St. Louis Cardinals. 29,184 fans packed the stands to witness the historic occasion.

Larry Jaster got the nod to start the contest for the Expos. One year earlier he had been pitching in St. Louis, then ended up being taken in the expansion draft. The first batter that stood at the plate in Montreal was future Hall of Famer Lou Brock who lined out to second base. The first hit on Canadian soil came off the bat of Curt Flood before Jaster retired the next two. In the bottom of the first Mack Jones hit a 3-run shot off of Nelson Briles to give the Expos their first lead of the day. With the fans still buzzing from the bomb, Jones came up in the second with two men on and legged out a triple to extend the lead to 5-0. Jaster looked to be helping his own cause in the third when he picked up an RBI single to put the squad from Montreal up 6-0. The crowd roared as the Expos took the commanding lead, but they would soon be brought back down to earth. 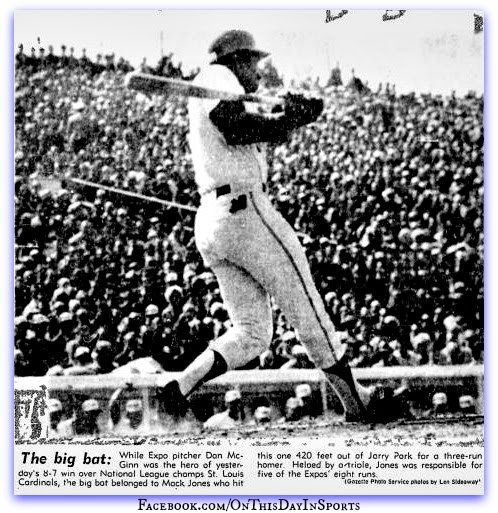 Jaster was cruising through the Cardinals lineup until the fourth inning when two errors and a single loaded the bases for the light hitting Dal Maxvill who proceeded to hit a grand slam. Jaster looked to be settling down when he set the next two men down, but the fourth inning implosion wasn't over just yet. Curt Flood laced a single into left, then moved over to third on a balk.Vada Pinson knocked Flood in and the Montreal lead was cut down to 6-5. The next man up was Joe Torre and he crushed a Jaster pitch that gave the Cardinals a 7-6 lead. Jaster's day was over and Dan McGinn was the name that the Expos manager Gene Mauch called on. McGinn retired the next batter, but damage had been done.

Despite the fact that he had already given up six runs Briles was still on the bump for the Cards to begin the fourth inning. He gave up back-to-back singles to lead off the frame. With Mack Jones on his way to the plate Red Schoendienst  was not about to watch him tag Briles again, so he called on Gary Waslewski to put the fire out. Waslewski put Jones on with an intentional walk in hopes of setting up a double play or even a play at the plate, but disaster followed when he fired a wild pitch passed the Cardinals backstop Tim McCarver which brought Maury Wills trotting in to score from third. McGinn not only held the Cardinals batters in check the rest of the game, he also came up with the game winning hit in the seventh. McGinn's big hit was a single that brought third baseman Coco Laboy in to score. Behind McGinn's performance on the mound and at the plate, the fans in Montreal got to witness a win as their newly christened franchise walked away victorious.

You can check out the box score here: http://www.baseball-reference.com/boxes/MON/MON196904140.shtml

This game garnered international attention with more than 200 reporters on hand. Before the contest political dignitaries along with club officials were announced. The loudest ovation that was heard during the pregame festivities came when Stan "The Man" Musial was introduced to the crowd. Musial was set to be inducted into the Baseball Hall of Fame later that same year.
Posted by Wade Forrester at 1:21 AM