April 6, 1893: Jack Burke Versus Andy Bowen in The Longest Boxing Match Ever 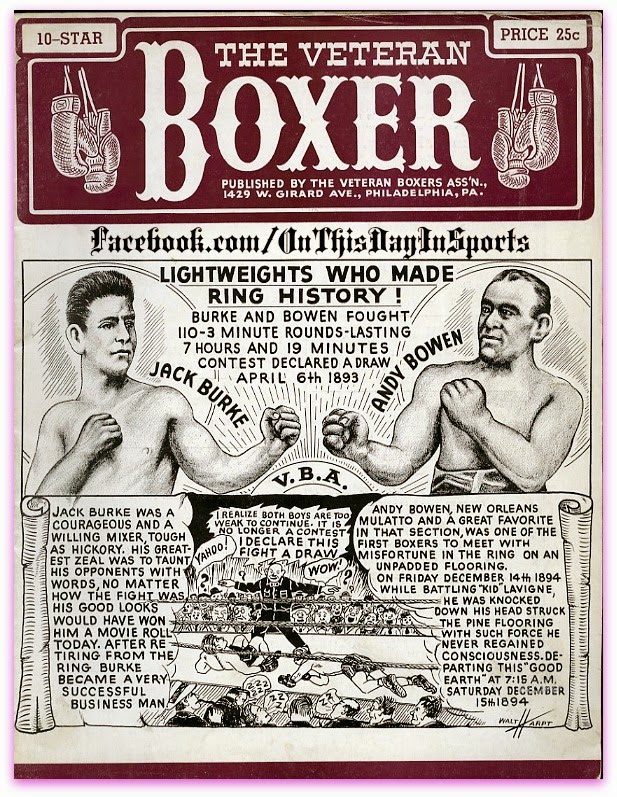 On April 6, 1893, Jack Burke and Andy Bowen fought a 110 round bout that lasted 7 hours and 19 minutes. The fight set the record for longest boxing match in the history of the sport and it is a record that still stands today. No winner was determined at the end of the affair as the referee John Duffy declared a draw after both the exhausted combatants could not muster the strength to throw a punch in the 110th round.

An estimated 8,500 fans showed up to witness the fight that would decide who would hold the lightweight title of the South. Bowen, a veteran boxer, hailed from New Orleans and came in weighing at 129. While Burke, a newcomer in the sport, was native of Galveston, Texas and weighed in at 130. When the fight came to an end at 3:45 a.m both boxers had dropped nearly 10 pounds.

The rounds were 3 minutes apiece. By the time the 50th round came to be both boxers were starting to slow down. Little did they know that they weren't halfway to the finish line. Burke broke both his wrists in the contest, but continued to battle, that is insane. In the 51st round Bowen asked Burke why he wasn't fighting back and Burke replied "I can't both my hands are gone." Yet, he continued to battle. As it turned out Burke broke both of his wrists in the contest, but somehow was able to hang in until the fight was called in the 110th round.

One month later Bowen squared off against Jack Everhardt in what was a 85 round fight that lasted more than 4 hours. In that match Bowen broke his left hand around the seventieth round, then went onto beat Everhardt with one hand. He was a gladiator, but he was not immortal. On December 14, 1894, Bowen suffered a skull fracture in a fight against Kid Lavigne. One day later he was dead. It was the only fight that Bowen lost in his career. He had fought 26 times since his career began in 1887, with 18 wins, seven knockouts, six draws, and one no decision.

The information on Burke is a little more murky than that of his opponent. Some publications say that he considered retiring but chose to continue his career in the ring. However, I was not able to find the records I would need to confirm it. What I do know is Burke passed away in 1942 after sustaining injuries in an car accident. At the time of his death Burke called Plainfield, New Jersey home, and it was said that everyone around Plainfield knew the tale of the 110 round battle. Burke was very proud of the fact that he had dueled with Bowen in the record setting bout that we are still talking about today.
Posted by Wade Forrester at 1:26 AM