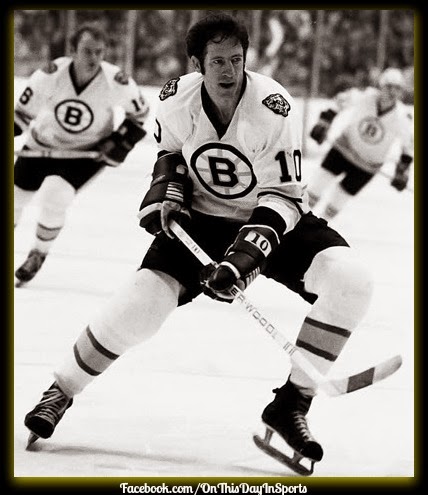 On April 3, 1977, Bruins center Jean Ratelle scored the 1,000th point of his career in a 7-4 division clinching win over the Toronto Maple Leafs in Boston. Rattell's 1,000th point came in the second period when he dished off a pass to Greg Sheppard who put it behind the Toronto netminder to extend the Boston lead to 3-1. Ratelle scored 1,267 points before he hung up his skates after the '80-81 season. His career spanned over 21 years. His first 15 seasons he donned the jersey of the New York Rangers before being sent to Boston in the blockbuster deal that included Phil Esposito. While Ratelle never did get to see his name etched on Lord Stanley's Cup, his career is not one to be forgotten as he will forever be remembered in the Hockey Hall of Fame.

The night Ratelle scored his 1,000th was one to remember. Stan Jonathan put Boston on the board in the first, then Peter McNab scored his 38th goal of the season on a play that was setup by Wayne Cashman in the second to extend the lead to 2-0, before Toronto's Bob Neely put one past Gerry Cheevers to cut the lead in half. It was followed by Ratelle's milestone marker that extended the Boston lead to 3-1. The 1,000 point plateau had been reached 16 years after he first stepped on the ice as a professional. Jonathan scored his second goal of the contest in the third, and Brad Parks added another to extend the Boston lead to 5-1, but the Leafs didn't go down easily. They stormed back into the contest with a goal by Lanny McDonald, and two more by Darryl Sittler to close the gap to 5-4 with time winding down. With their backs against the wall Toronto yanked their goalie and Sheppard and Don Marcotte added a pair of empty netters before the final horn sounded.

The victory was the 14th out of the last 18 for the Bruins which included two ties as well. It clinched the Adams division by two points, and gave them a week to get ready to make a run at the Stanley Cup. The Bruins did reach the Finals, but ran into a Canadiens powerhouse from Montreal. The Habs swept the Bruins in four straight, but the ride that got them there was a memorable one that included one of the greatest highlights in the career of Mr. Jean Ratelle.

Take a look at Ratelle's career numbers here: http://www.hockey-reference.com/players/r/ratelje01.html
Posted by Wade Forrester at 12:26 AM