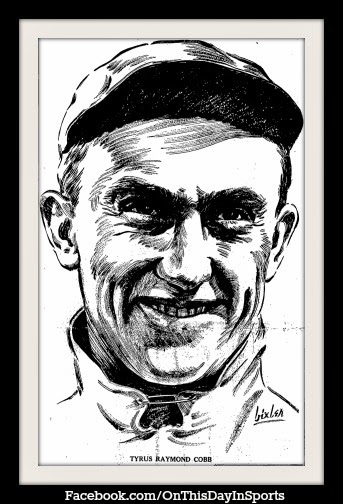 On April 26, 1904, some 18-year-old kid by the name of Tyrus Raymond Cobb made his professional debut with the Augusta Tourists of the Southern Atlantic League. He was quite impressive in his first showing as he went 2 for 4 with a double and a home run. Just two days later Cobb was released from the Augusta club for financial reasons, however, the career was far from over, in fact a Hall of Fame career had just begun.

Cobb got his start in baseball by sitting down and writing letter after letter to every club in the Southern Atlantic League. He was just a 17-year-old kid who wanted to play ball. The Tourists out of Augusta, Georgia were the only team to respond.It was all he needed. When the Augusta club wrote back they let him know that they would give him a tryout as long as he paid his own way to get there. He was to be paid $50 a month as long as he made the team.

The disappointment of being released two days after the impressive debut did not last long. A semi-pro team out of Anniston, Alabama snatched him up and he did quite well by hitting .370 in 22 games along with six stolen bases. When the owner of the Augusta club that sent him packing caught wind of this, a telegram was sent to Cobb asking him to rejoin the club, and that he did.

Things did not go how Cobb would have wished as he struggled the rest of the season in Augusta, and even had the owner of the team consider trading him. However, he stayed put, and came out the next season and simply tore up the basepaths, as he stole 40 bases in a 104 games. He was batting .326 when the Detroit Tigers came calling.

The way Cobb came to be a Tiger is an interesting tale to say the least. The organization had loaned Eddie Cicotte to the Augusta club in 1905, and in return they got their pick of the Augusta litter. Cobb came close to not even being an option. On Opening Day in 1905, Cicotte was on the bump for the Tourists and he had pitched a gem. Up 2-0 headed into the bottom of the ninth, Cobb took some popcorn into centerfield with him, and was out there snacking away when the ball found him. Cobb committed an error that cost his club a run. Luckily for him Augusta hung onto win 2-1, but Cicotte was pissed and the two players went at it after the game. Cicotte wasn't the only one pissed, so was the manager Andy Roth who made a deal to sell Cobb to Charleston for the eye popping figure of $25. Once the owner of the Augusta club heard of the transaction he quickly squashed it, and even gave Cobb a raise. Pretty crazy to think that a little popcorn snack nearly altered history.

With the Tourists 1905 season coming to a close, the Tigers organization began to mull over their options in Augusta. The owner of the club Frank Navin, had no interest in Cobb, as he had his eyes on Clyde Engle (Engle did play some ball in the majors, just not at the level of Cobb). The manager of the club Bill Armour had other ideas, and that kid Ty Cobb was on his radar. With the endorsement of an umpire as well as Cicotte, they came to an agreement that Cobb would be their man. To make the deal final Tigers purchased Cobb's contract for $700. The trip through the majors is why we know who Ty Cobb is, however, the prequel was quite the story.

This is a very detailed account of Cobb's life and career: http://sabr.org/bioproj/person/7551754a