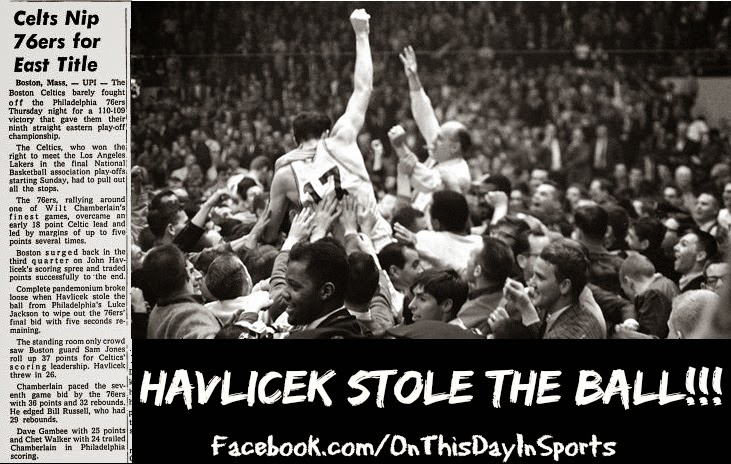 On April 15, 1965, in Game 7 of the Eastern Conference Finals at the Boston Garden, the Celtics held onto beat the Philadelphia 76ers 110-109. The game had an unforgettable finish as Boston was clinging to a one point lead with just seconds to go. Philadelphia's Hal Greer was set to inbound the ball in hopes of setting up the game winning play only to have John Havlicek tip the ball to his teammate Sam Jones. With the Celtics play-by-play man Johnny Most proclaiming "Havlicek stole the ball!! Havlicek stole the ball!! It's all over!!!", Sam Jones dribbled the ball until the clock ran to zeroes and the crowd went crazy in Boston. It was the ninth consecutive conference title for the Celtics and they would  go onto win their seventh of eight consecutive Championship titles by toppling the Los Angeles Lakers in the Finals. The call by Most is one that will never be forgotten in Boston and beyond.

You can watch the final play and listen to the call here: https://www.youtube.com/watch?v=J4fTjcJwImw

Posted by Wade Forrester at 1:37 AM