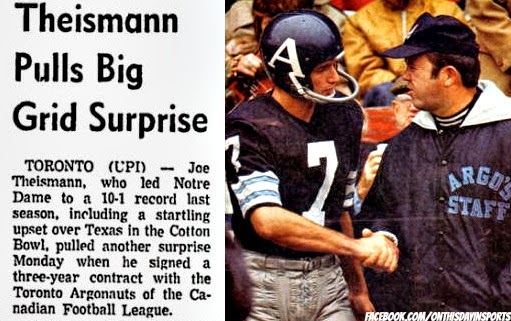 On April 5, 1971, Joe Theismann surprised the world of football by signing a three-year contract to play for the Toronto Argonauts. The Notre Dame signal caller had been picked in the fourth round of the NFL draft by the Miami Dolphins. Theismann spent  three seasons with the Argonauts, before the Redskins obtained his rights in 1974. Theismann went onto have a legendary career with the Skins that included a Super Bowl victory in 1982.

Just 27 days before the deal with the Argonauts was announced, the Dolphins held a press conference to announce they had reached an agreement with Theismann. The problem with the agreement was there was no signature involved. It was a handshake agreement. The Dolphins then mailed him a contract, and Theismann felt the terms were very different than the terms he had agreed to. This opened the door for the Argonauts, who had largely given up on the idea of signing him. However, their head coach Leo Cahill had made his interest known. The deal Toronto put on the table was two years for $125,000 which Theismann did put a signature on. The spurned owner of the Dolphins, Joe Robbie issued a statement saying that he expected Theismann to still honor the agreement that they had reached. The Dolphins owner even sent his head coach Don Shula to South Bend, Indiana in an effort to convince the young quarterback to reconsider. There wasn't much the coach could do as Theismann had signed a legally binding agreement.

In Toronto, Theismann led the Argonauts all the way to the Grey Cup in 1971, only to have a fourth quarter fumble cost them the championship. Injuries spoiled the '72 season, however, he bounced back with a solid '73 season before heading back to the states. After joining the Redskins in '74, Theismann returned punts. It wasn't until 1978 that he took over for a retiring Billy Kilmer. Theismann guided the Redskins ship for the next seven seasons, which included  2 Pro Bowl appearances and the Super Bowl victory. Theismann became a legend in Washington which probably would have never happened if he had not signed with the Argonauts on this day.
Posted by Wade Forrester at 1:02 AM