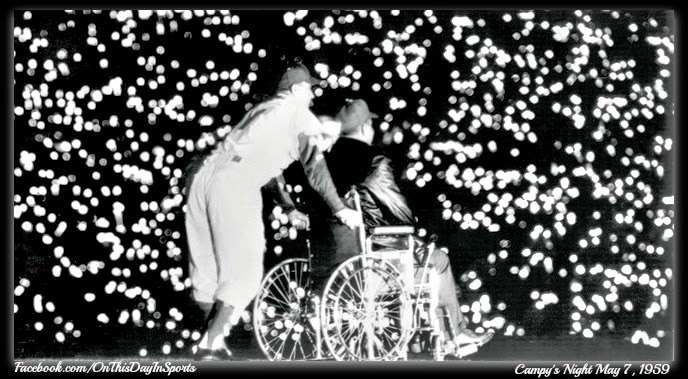 On May 7, 1959, a record-setting 93,103 fans packed the Coliseum in Los Angeles for "Campy's Night." The exhibition game that was set to be played game against the New York Yankees would be the secondary story on this night as all of those in attendance were there to help the former Dodgers great who had been paralyzed in an automobile accident, and had medical bills piling up. Campanella received a thunderous cheer when he was rolled onto the field by shortstop Pee Wee Reese. The former Dodgers backstop came across a loudspeaker and said to the crowd "Thank you ladies and gentleman. I want to thank each and everyone of you from the bottom of my heart." He went on to thank the owners of the Yankees and the Dodgers before saying "This is something that I'll never forget. I thank God that I am here living to see it. Thanks a million." What followed was a beautiful thing as public address announcer called on the crowd to light matches that would resemble candles on a cake to honor Campanella. The Dodgers fell to the Yankees 6-2 that night, however, it would be a night that will forever be remembered for many more reasons than a box score. An estimated $60,000 was raised for the man who had manned the catcher position for 10 seasons wearing Dodger blue.

Posted by Wade Forrester at 1:10 AM