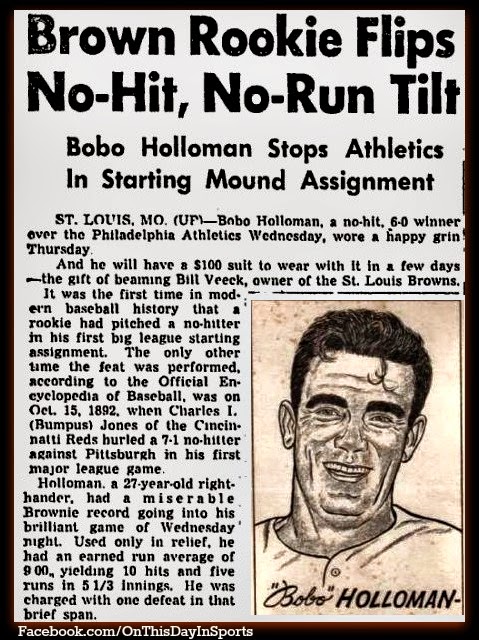 On May 6, 1953, in front of a home crowd at Sportsman's Park, Bobo Holloman of the St. Louis Browns became the first rookie pitcher in the modern era to toss a no-hitter in his first major league start. Holloman's dominant performance led to a 6-0 victory over the Philadelphia Athletics. The feat had been accomplished two other times before the modern era began, the first was Ted Brientenstein's first major league start with the St. Louis Browns (who later became the Cardinals) in 1891, and in 1892 Charley Jones threw a no-hitter for the Cincinnati Reds in his first major league start. Holloman's no-no was the fourth and final no-hitter in the history of the St. Louis Browns who would soon be headed to Baltimore. He faced 31 men in the contest, walking three, while the other man got on because of his own error. Holloman not only mowed down batter after batter, he also knocked in 3 of the 6 runs scored for the Browns as he made his way into the history books. Holloman took the long route to the major leagues and was 27 years of age when he fired the no-hitter. He went onto post a 3-7 record in '53, never pitched another complete game, and after July 19th of  that same season his days in Major League Baseball would come to an end. Despite that fact, Holloman is the only rookie during the modern era to accomplish the feat. Clay Buchholz (2007) and Wilson Alvarez (1991) each did it in their second major league start.

You can view the list of rookies to throw a no-no here:http://mlb.mlb.com/mlb/history/rare_feats/index.jsp?feature=rookie_no_hitter

You can read more about Bobo Holloman here: http://sabr.org/bioproj/person/ae6a6b08 It includes a great account of the no-hit perfomance by the Browns owner Bill Veeck.

Check out the box score here: http://www.baseball-reference.com/boxes/SLA/SLA195305060.shtml
Posted by Wade Forrester at 1:31 AM