On May 31, 1938, Yankees legend Lou Gehrig played in his 2,000th consecutive game. The man known as the "Iron Horse" had began his historic streak on June 1st of 1925, when he pinch hit for Wally Pipp. The next day he was penciled into the starting lineup, and each day that followed those he was penciled into the starting lineup as well. Gehrig came up with an RBI single during the milestone game that saw his Yankees prevail over the visiting Red Sox with more than 40,000 in the seats at Yankee Stadium.

In good spirits after the game there was talk of the historic streak reaching 2,500 games, as Gehrig laughed at the thought of not playing in a game. However, the streak came to an end much sooner than expected, as that '38 season saw an overnight demise of one of baseball's greatest players. He had still put up solid numbers, but something was not right. Many thought Father Time had paid him a visit, and the once great Gehrig, was now just an aging ballplayer.

What they did not know was he had been stricken by the disease that now bears his name. He removed himself from the lineup on May 2, 1939, because he was struggling at the plate. The streak was over at 2,130 games. Within a month of his him removing himself from the lineup an official diagnosis that came on his 36th birthday explained why Gehrig had not been the same player he had been for so long. He had ALS, an unforgiving disease that caused a hardening of the spinal cord, before leading to muscle deterioration, and death. Given just three years to live, Gehrig retired from the game, and on July 4th of '39 delivered a tearful speech in front of a large crowd at Yankee Stadium. Although Gehrig knew his time on earth would be over very soon, he still called himself the luckiest man on the planet. He passed away on June 2, 1941, at the age of 37. 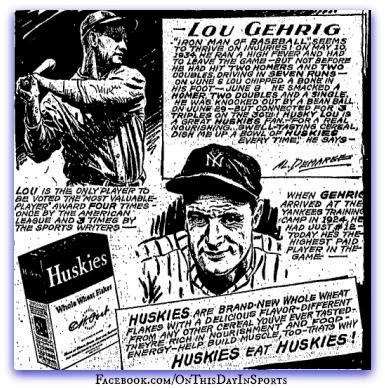 The story of Gehrig is a story of greatness, and of a tragedy that took a man's life way too soon. I love
looking at the lives and careers of all the great athletes that I have gotten to talk about since I started this page. When I sat down to write this I could not help but think to myself how unfair the story of Lou Gehrig is. I told a friend a ballplayer like that should have gotten a chance to sit in a booth at a ballgame, and talk about the old days, while the fans soak in every word. I got to do that just the other day by listening to the great Bob Gibson; it's really something. Fate dealt Gehrig a bad hand. While it might be unfair, it was the hand that was dealt.

Not too long ago I posted the ad to the right on my Facebook page. It came out of a March of '38 issue of the Sporting News. I was quickly reminded that the ad was printed one year before he was forced to retire. I had not thought about it before I posted it, I just thought it was a great old vintage ad. After the fact I remember making a comment that was along the lines of: when a player leaves a legacy behind like Lou did that player will live forever in the hearts and minds of people like me and you. He will forever be remembered at the Hall of Fame in Cooperstown, New York, and amongst the fans of the great game that is played on a diamond. Lou Gehrig is one of the immortals.

Stats of a legend: http://www.baseball-reference.com/players/g/gehrilo01.shtml