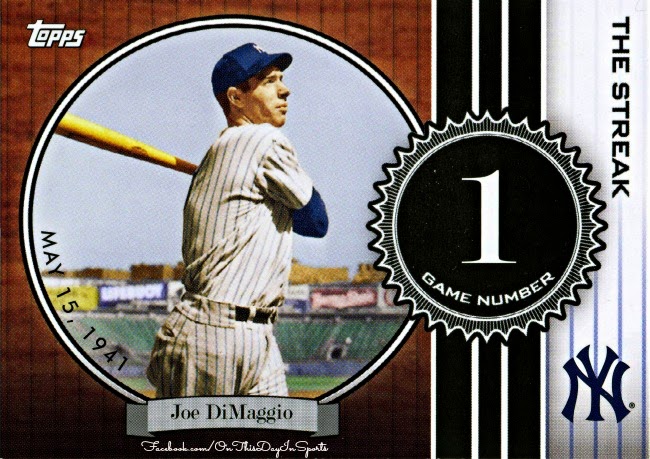 On May 15, 1941, the New York Yankees suffered what proved to be their worst loss of the season in front of a home crowd as the Chicago White Sox prevailed by the score of 13-1. It also marked their fifth consecutive loss, and dropped them a game under .500. However, that one run that was scored by Yankees was a little single off the bat of Joe DiMaggio in the bottom of the first inning. That little single began one of the most storied streaks in the history of sport, as DiMaggio picked up at least one hit in every game that he played in until July 17th of that same year when he was held hitless by the Cleveland Indians. That little single had started a span of 56 games that would set a major league record  for hitting streaks that still stands today.

The previous record had been held by Wee Willie Keeler, who had set the bar at 45 in 1897. The modern day record had stood at 41, which was accomplished by George Sisler in 1922. As Joe approached Sisler's mark a media storm began. It was a storm that did not have an effect on the hot bat of Joltin Joe. Once he surpassed both Sisler and Keeler, Joe kept on hittin until that day in Cleveland, and it took two spectacular plays by the Indians third baseman Ken Keltner to put the streak to bed. When it was all said and done DiMaggio had hit .408 during the historic stretch by picking up 91 hits in 223 at bats, which included 15 bombs and 55 ribbies.

The day after the Yankees suffered the 13-1 loss to Chicago, some newspapers referred to DiMaggio's hit as a weak single. Those same newspapers were also referring to the club from New York as "The once mighty Yankees" after they hit the early season skid. If they only knew what was to come...

DiMaggio's streak did more than shatter a record, it sparked his team, and they would go onto win the World Series, while Joltin Joe claimed the American League MVP Award. Some would argue that the MVP Award should have gone to Ted Williams in Boston who hit an eye popping .406 that season compared to Joe's .357. However, the Sox finished 17 games behind the pennant winning Yankees as Joe had proved to be the Most Valuable Player in his league.

The closest any player has come to the 56 game hitting streak record was Pete Rose in 1978, who had his snapped at 44 games, just one shy of Keeler's mark. In other words: no one has even come close to that magic number 56. Legendary.

This might not be the prettiest box score in the history of the Yankees organization, however, there is a piece of beauty in there, as it holds a stat line: DiMaggio 1 for  4
http://www.baseball-reference.com/boxes/NYA/NYA194105150.shtml

Check out the list of men who have picked up a hit in at least 30 consecutive games:
http://mlb.mlb.com/mlb/history/rare_feats/index.jsp?feature=hitting_streaks
Posted by Wade Forrester at 12:10 AM