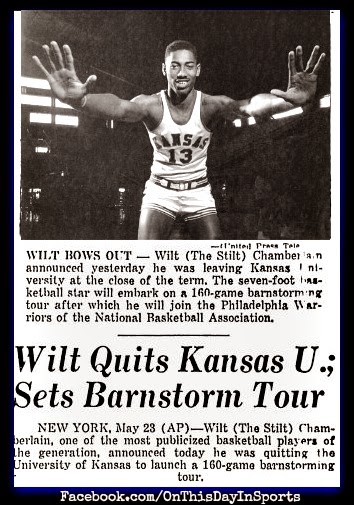 On May 23, 1958, Wilt Chamberlain announced that he would forego his senior year at Kansas, and go on a 160 game barnstorming tour as a professional basketball player. Unhappy about the way he was developing at Kansas, Chamberlain felt this move would help him become a better pro. The Philadelphia Warriors owned his rights, but he could not wear their uniform until his class graduated, due to a rule that was in place. The barnstorming tour never came to fruition, however, less than a month after this announcement Chamberlain inked $65,000 deal to play for the Harlem Globetrotters for one year, which made him the highest paid player in basketball history. It was just the beginning of a storied career in the ranks of the professionals.

You can read about that storied career here:
http://www.nba.com/history/players/chamberlain_bio.html
Posted by Wade Forrester at 12:00 AM