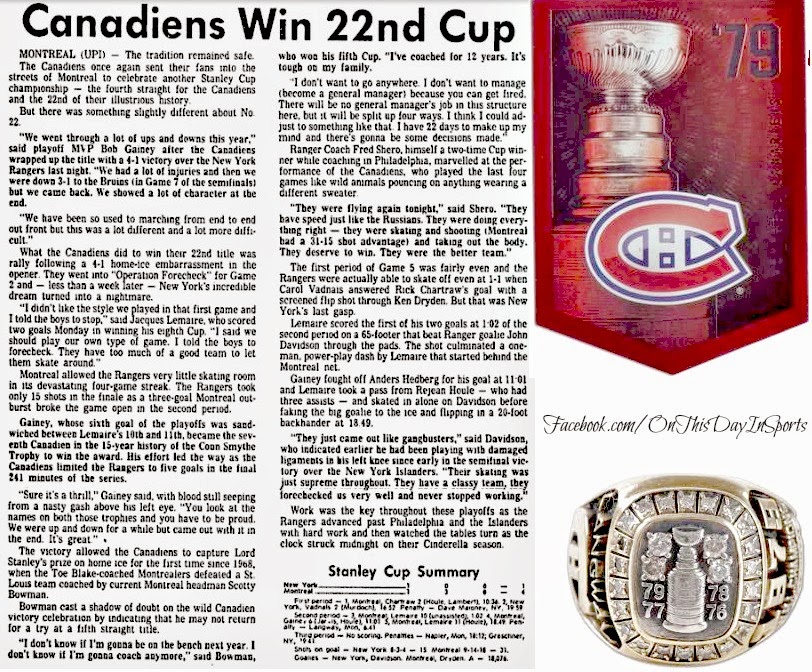 On May 21, 1979, the Montreal Canadiens hoisted Lord Stanley's Cup for the 22nd time. Not only was this the 22nd time the Canadiens celebrated a Championship Title, it was the fourth consecutive title for the team who has laid claim to hockey's top prize more than any other team in the history of the league. The title run ended after the '79 championship, and it fell one short of the all time NHL record for consecutive championships that was set by the same organization from 1956 to 1960.

The Championship in '79 came against the New York Rangers, as the club from Montreal took out the New Yorkers in five games. The Rangers took game 1 of the series, before they watched the Canadiens take four straight, which included an overtime thriller in the fourth game. The deciding game saw each team trade first period goals, then the Montreal squad scored three goals in the second, with two coming off the stick of Jacques Lemaire. The crowd at the Forum in Montreal was electric throughout the scoreless third that saw Ken Dryden turn away everything that the Rangers threw at him as the Canadiens marched toward their fourth consecutive title. It was the first time since 1968 the Canadiens won the title on home ice, and the party that followed was greater than the three that came before it because of that. Montreal has added two more titles ('86 and '93) since, and are most definitely one of the most storied teams in all of hockey.
Posted by Wade Forrester at 12:10 AM