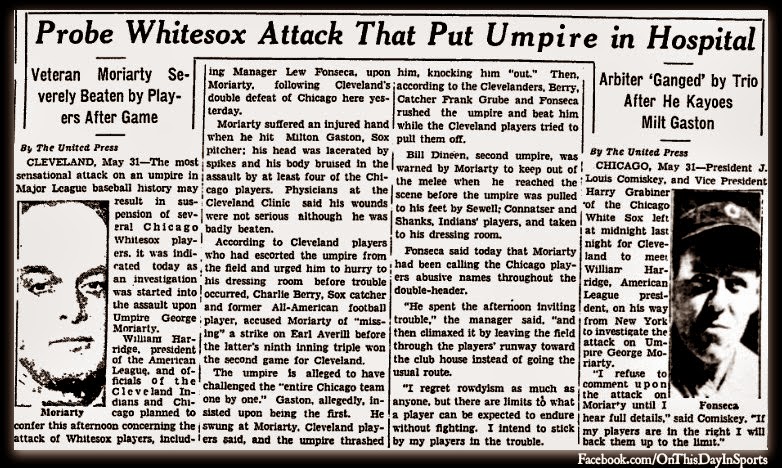 On May 30, 1932, several members of the White Sox savagely beat umpire George Moriarty, after dropping both games of a doubleheader against the Cleveland Indians. Throughout each of the contests Moriarty and the White Sox players exchanged words, and by the time the second game was in the books the pot was boiling over. The altercation began when Sox catcher Charlie Berry accused Moriarty of purposefully missing a crucial call in the ninth inning of the second game that led the Clevelanders to victory. The situation escalated quickly, and Berry was joined by his teammates, who Moriarty made that not so wise decision to challenge them each to a fight. Pitcher Milt Gaston chose to be Moriarty's first challenger, which was probably not the wisest decision by him, as the umpire knocked him out cold. The ump suffered a broken hand by punching the pitcher, and he still had a fight on his hands as catcher Frank Grube, joined by skipper Lew Alfonseca, unleashed a merciless beating on the ump that would send him to the hospital.

Two days after the incident, fines and suspensions were handed out. The Sox skipper, Alfonseca along with Gaston received the harshest penalties, as they both were fined $500 apiece, while Gaston also received a 10 day suspension as well. The catchers,Charlie Berry and Frank Grube received fines of $250 and $100, and coach Johnny Butler was handed a five game suspension for using profane language toward the umpire. The umpire not only walked away with cuts, bruises, and a broken hand, he was also severely reprimanded after the incident. Moriarty was no stranger to a good scrap. During his playing days with the Detroit Tigers it was said that he and the legendary Ty Cobb nearly threw down. When Moriarty handed Cobb a baseball bat so that things could be even, Cobb quickly decided it was a battle that he was not going to fight.

If you would like to learn more about George Moriarty's career in baseball give this a read: http://sabr.org/bioproj/person/44c82f26
Posted by Wade Forrester at 12:03 AM