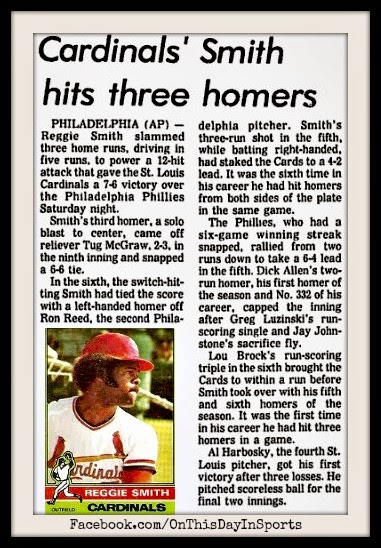 On May 22, 1976, St. Louis Cardinals switch hitting first baseman Reggie Smith belted three home runs at Veterans Stadium in Philadelphia, as he led his club to a 7-6 victory over the hometown Phillies. Smith's first big blast was a three run shot from the right side of the plate in the fifth that gave the Cards a 4-2 lead, his second was a solo shot from the left side in the seventh that tied the ballgame at six, and his third was a solo shot from the right side in the top of the ninth that proved to be the game winner.

The three home run performance was the only time that Smith achieved the feat in a career that spanned 17 seasons, and included 314 home runs. Throughout those 17 seasons he wore the uniform of the Boston Red Sox, St. Louis Cardinals, Los Angeles Dodgers, and the San Francisco Giants. The seven time all star was crowned a World Series Champion in 1981 as a member of the Dodgers.

Check out his career numbers here:http://www.baseball-reference.com/players/s/smithre06.shtml

And last but not least, you can read an in depth bio about the life and career of Reggie Smith here:
http://sabr.org/bioproj/person/29bb796b