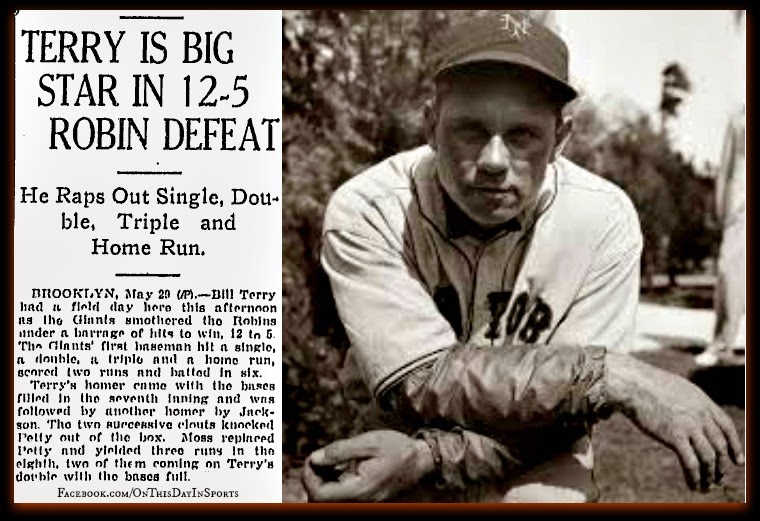 On May 29, 1928, New York Giants first baseman and future Hall of Famer Bill Terry hit for the cycle as he led the way in a 12-5 victory over the Brooklyn Robins at Ebbets Field in New York. The cycle by Terry was more than the average cycle as he had smashed a seventh inning grand slam that made him the first player in the modern era to add a grand slam to the historic feat.

Only one other time had it been accomplished in the major leagues, and that came on May 25, 1882, when Curry Foley of the Buffalo Bisons smacked a grand slam on a day that he had a triple, a double, and a single to his credit. Including Curry, only nine men have added a grand slam to the cycle. Only one of those men did it in walkoff fashion, and that was Tony Lazzeri. What makes Lazzeri's day at the dish even more remarkable is his cycle was a natural cycle, that was finished off with a blast that forever cemented him in the history books.

Terry's seventh inning blast forever marked a page in the history books for him as well. An outstanding hitter, Terry put together nine consecutive seasons where he batted .320 or better, with the pinnacle coming in 1930 when he hit an eye popping .401. He picked up at least 200 hits in six seasons, and parked 154 balls over the wall in a career that spanned 14 years. In 1954, Terry joined the ranks of the immortals in Cooperstown, New York.

Check out the box score here: http://www.baseball-reference.com/boxes/BRO/BRO192805290.shtml
Posted by Wade Forrester at 1:03 AM