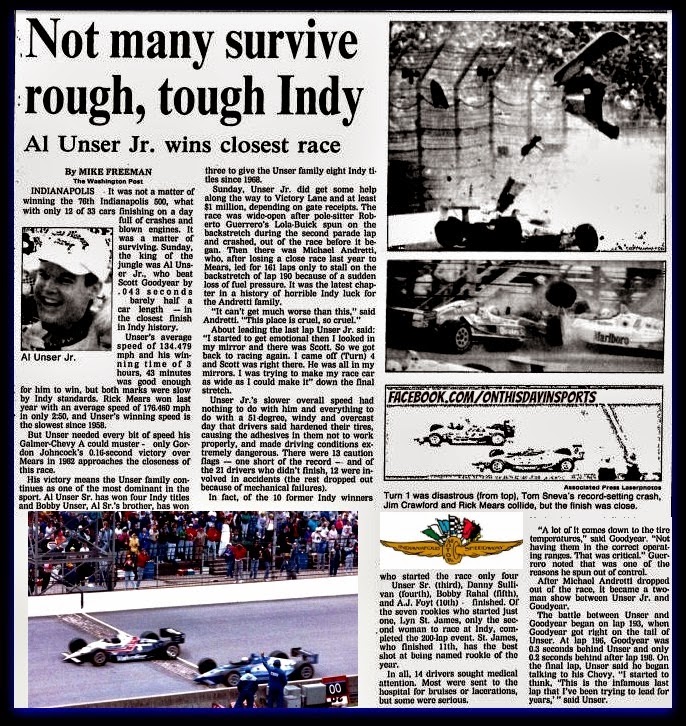 On May 24, 1992, Al Unser Jr. claimed the top prize at the Indianapolis 500, by holding off Scott Goodyear by just .043 of a second , in what was, and still is, the closest Indy 500 ever. It was a cold and windy day in Indy, which led to less than favorable conditions for the drivers. 21 out of the 33 drivers failed to finish, with 12 of them being involved in a wreck, while the rest did not finish due to mechanical failure. Michael Andretti dominated the race by leading 160 laps, and had a comfortable lead, when his fuel pump decided to stop pumping with just 11 laps to go. Andretti's bad fortune would turn into Unser's good fortune, as he held Goodyear off, and ended up in victory lane. The win by Unser Jr. was his first at the Indy 500, and it made him the first second generation driver to claim victory at the world famous track. His dad had won the race four times, with his last coming five years to the day that he watched his son win the same race. Unser Jr. became a two-time winner in 1994.

Watch Al Unser Jr. drive his way into the history books here:
https://www.youtube.com/watch?v=D6z5m_MKj3E
Posted by Wade Forrester at 12:41 AM