May 12, 1986: Wickenheiser Puts The Exclamation Point On The Monday Night Miracle 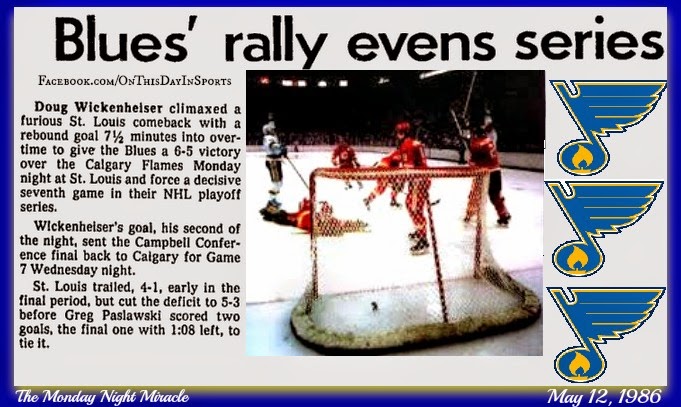 On May 12, 1986, one of the most memorable hockey games in the history of the St. Louis Blues organization took place in St. Louis as the Blues prevailed 6-5 over the Calgary Flames in Game 6 of the Campbell Conference Finals. The game has been dubbed the "Monday Night Miracle" as the team came into the contest facing elimination, and found themselves trailing  4-1 headed into the third, before capping off a miraculous comeback with a goal by Doug Wickenheiser 8 minutes into overtime.

The memorable comeback began with 14 minutes to play in the third, when Wickenheiser cut the score in half with a 35-foot slap shot that got behind the pads of Mike Vernon. Seven minutes after Wickenheiser's first tally of the contest, a former Blue, Joe Mullen answered back for Calgary to put the Flames up 5-2. Brian Sutter came right back and had an answer of his own for Mullen's goal and cut the lead to 5-3. If the Blues were gonna lose they were not going to do it without a fight, and because of that they would be victorious.

With the crowd at the Old Barn feeding the fire Greg Pawlaski cut the lead to 5-4 at 15:49 in the period, and it was Pawlaski who stole the puck from Jamie Macoun, and punched it in with just 1 minute and 8 seconds to go in regulation to tie it up. Both teams desperately fought to score the game winner in the overtime frame, and just 30 seconds before Wickenheiser's historic goal, St. Louis' goalie Rick Wamsley watched a 65 foot shot from Joe Mullen's stick blaze past him, only to have the crossbar make a ringing save. 30 seconds later Bernie Federko stole the puck from Paul Reinhart's skates, passed it to Mark Hunter who fired the puck into Mike Vernon's pads, as Doug Wickenheiser came flying into score on the rebound. The place erupted with a cheer that might have loosened the roof at The Arena, as the Blues had just forced a Game 7.

While there was a storybook ending to this game for the Blues, there was not a storybook ending to the series. Two days later, the Flames beat the Blues 2-1 in Calgary, which punched their ticket to the Stanley Cup Finals, where they fell to the Montreal Canadiens four games to one. It might not have ended the perfect way for Blues fans, but on that one night in St. Louis, history was made, and it will forever be remembered as "The Monday Night Miracle."

Doug Wickenheiser became an instant hero that day in St. Louis, and any time you hear his name mentioned in the Gateway City, memories of that game will surely come to mind. Unfortunately, Wickenheiser passed away in 1999 after a long battle with cancer. He was only 37 years of age. The Blues organization established The 14 Fund in memoriam of the player who provided the exciting overtime winner for the club in '86. The fund has led to millions of dollars being donated to help promote the health and wellness of kids all around the St. Louis area. If you ever feel compelled to donate to a charity please consider The 14 Fund.

Here is a link to make a donation: http://blues.nhl.com/v2/ext/14fund/donation.html

Here is a great highlight video from the historic contest: http://video.blues.nhl.com/videocenter/console?id=3354