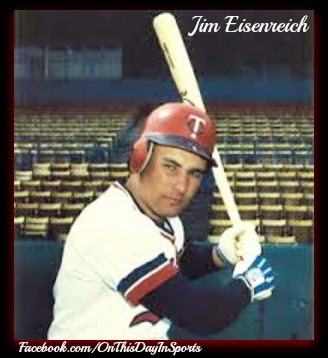 On May 4, 1982, the Minnesota Twins fell to the 5-3 to the Red Sox in Boston. However, the scoreboard was not why this fact made it to the page. The reason why it made it to the page is because before the third inning began rookie centerfielder Jim Eisenreich chose to pull himself from the game after being taunted by the Boston fans. Eisenreich suffered from Tourette's syndrome.

Up to that point it had not been diagnosed. He simply knew something was not right as he suffered from twitches. While doctors tried to figure out the reasons why this was happening to him, others caught on and some thought it was funny. Even his own teammates gave him grief over it. On that day in Boston a newspaper article documented Eisenreich's struggles with what was being considered a nervous condition. It fed a fire that would ultimately lead to the fans being very cruel as he tried to man his post in the outfield. As the taunts rained upon him his condition worsened to the point that he was hyperventilating and trembling before he asked to be removed. Eisenreich tried to work through the issues, but it led to an early retirement. He played in just 34 games in 1982, 2 games in '83, and 12 games in '84,  before missing all of 1985 and 1986. With the help of medication and a correct diagnosis Eisenreich made a triumphant comeback with the Kansas City Royals in 1987. He was able to play ball for the next 13 years, and that included a World Series ring with the Marlins in 1997.

As a man I look at Eisenreich as a hero who made it be known that great obstacles can be overcome. Those dark days turned into very bright days, and today he influences children who are fighting the same battle that he has had to fight. We as people can be very cruel when it comes to making fun of a person who suffers from an affliction. It is important that we remember that nobody chooses to suffer from a disease. We all have our faults, some by choice, while others are out of our hands. No matter what they might be always remember the person that is being taunted has to live with whatever it is they are being taunted about. Life is not always fair, but we can definitely help make it more fair by treating people with respect even if they have something that makes them a little different than the rest. In the end we are all different, and we all could be taunted for one reason or another. Just think about it, and think about how you might feel if you were standing in those shoes. Eisenreich was able to turn his condition into something that we can all learn from, and for that I tip my cap to him.

May 15th to June 15th is Tourette's Syndrome Awareness Month. This link will guide you to the National Tourette Syndrome Association page https://www.facebook.com/TSAUSA?v=wall There are many ways to make a difference in this world and simply showing support is one of them. The site will offers a variety of other ways to help out as well.

Posted by Wade Forrester at 2:54 AM