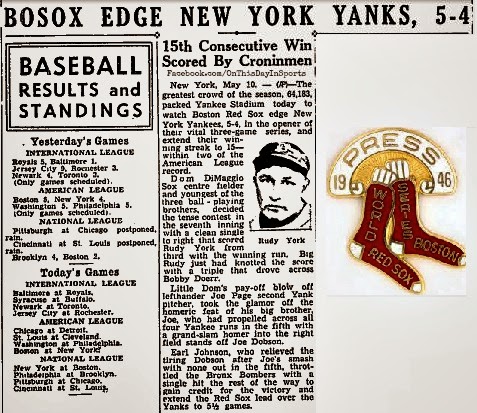 On May 10, 1946, a grand slam off the bat of Yankees slugger Joe DiMaggio could not stop the Boston Red Sox from extending their winning streak to franchise record setting 15 games. A crowd of 64,183 packed the stands at Yankee Stadium to witness the opening game of the three game series. They saw a true battle that had the Red Sox jump out to a three run lead in the third on RBIs by pitcher Joe Dobson, and rightfielder George Metkovich, before Joltin Joe erased the Yankees deficit with one big swing of the bat in the bottom of the fifth. The seventh inning decided the contest. Joe Page who was on the mound for the Yankees in relief of Red Ruffing led the frame off by issuing a walk to Bobby Doerr, and Rudy York blasted a ball to left-center that ended up being a game tying RBI triple. It was Joltin Joe's brother Dom who delivered the game winning hit with a single into right that brought York trotting into score. Earl Johnson relieved Dobson after Joe ordered up his grand slamwich, and Johnson was lights out as he helped the BoSox record their 15th straight victory.

The streak came to an end the next day, and to date it is the longest winning streak in the history of the storied franchise. The Red Sox would go onto win the American League Pennant and met the St. Louis Cardinals in the Fall Classic where they lost a hard fought seven game battle.