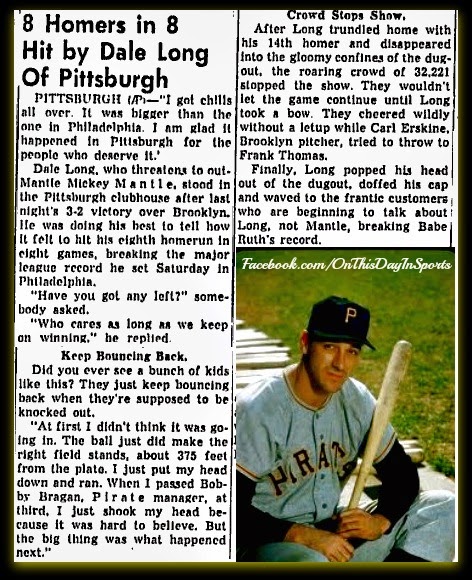 On May 28, 1956, Dale Long of the Pittsburgh Pirates blasted a fourth inning solo shot that instantaneously put him in the record books, as it was his eighth blast in his eighth consecutive game. The big blast also tied the contest, and proved to be crucial for the Pirates who would go onto win the game by the score of 3-2 over the Brooklyn Dodgers in Pittsburgh. Long was the first man to hit eight bombs in eight games, and to date only Ken Griffey Jr. and Don Mattingly have joined Long in what is a very exclusive club. Both Long and Griffey, each hit eight bombs during their eight game span, while Mattingly blasted 10 total over his eight games. Long hit a total of 27 dingers during that '56 campaign, which was a career high for the well traveled first baseman.

You can check out the box score here:
http://www.baseball-reference.com/boxes/PIT/PIT195605280.shtml