March 8, 1941: Hugh Mulcahy becomes the first MLB player to be drafted during WWII 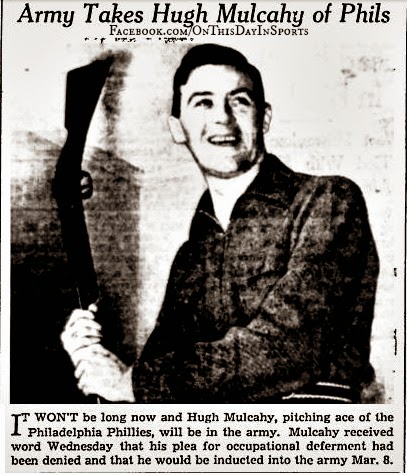 On March 8, 1941, Hugh "Losing Pitcher" Mulcahy of the Philadelphia Phillies became the first major league baseball player to be drafted during World War II. This came nine months before the bombing Pearl Harbor. He had earned his nickname by losing 76 games between 1937 and 1940. While the back of his baseball card had some numbers in the wrong column, he is a war hero who deserves to be remembered.

Mulcahy was born and raised in Massachusetts. While he was growing up he primarily played shortstop. After graduating high school he attended and played ball at the Dean Academy in Franklin, Massachusetts. He only spent a year in school before turning to a semipro league called the Boston Twilight League. It was there where he took up pitching. After posting an 8-12 record in that league he signed a minor league deal with the New York Giants. Fromt here he bounced around for a number of years before landing with the Phillies organization. The Phillies were managed by Jimmie Wilson. He was told Mulcahy could pitch but he needed to work on his mechanics. The team was starved for pitching so he gave him a shot. The manager helped straighten out some mechanics and it looked like he might be able to pitch for the big club. He made his major league debut in 1935 at Forbes Field in Pittsburgh. He came in late in the game had sat down three batters in a row. Those three batters were Lloyd Waner, his brother Paul Waner, and Arky Vaughn. All three of those men were future Hall of Famers. 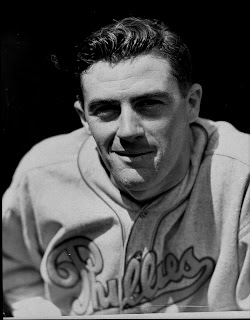 Within a couple of seasons Mulcahy had found himself a permanent spot on the major league staff. His record might not have shown it but he was a workhorse. In 1937, he made 56 appearances and pitched more than 200 innings in relief and as a starter. His record was 8-18 that season and it was the beginning of a rough stretch that earned him the nickname that could have gone to any other pitcher on the staff. They simply weren't a good team. In his second full year in the majors Mulcahy appeared in 46 games, he started 34 of those games and posted a 10-20 record, it was that season that a writer tagged him as "Losing Pitcher" Mulcahy. The name stuck when he posted a 9-16 record in 1939 then a 13-22 record in 1940. When it came to his teammates and his manager they had nothing but respect for him because they knew he gave 100% effort and laid it all on the line each and every time he took the mound.  In 1940, he was selected to the all star game. His 13-22 record was very deceiving that season. By the time the season had ended he had completed 21 games which was the third most in the league, he pitched a career high 280 innings which was fourth in the league and his 3.60 average was well below league average. There is a good chance he would have been much more successful if he was with the right club as the team around him only hit .238 that season before he was called into war. 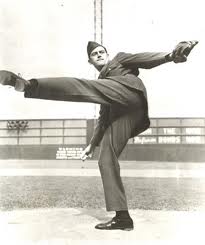 Mulcahy had just signed a lucrative deal with the Phillies following that 1940 season, then came the call into the service. He jokingly told the Sporting News that his losing streak was over and that he was on a winner now. When he was first drafted it only looked like he would have to serve a year before reaching the age of 28 which was cutoff age for drafting men. Ten months after he was was inducted into the Army he was discharged. Just two days after his discharge everything changed with the bombing of Pearl Harbor. His service would be needed once again.  By the time he was discharged again it was 1945 and he had missed 5 full seasons in the prime of his career.

Mulcahy always looked at things through a positive lens. He never did look at life like he had been dealt a bad hand. He felt fortunate to have made it to the major leagues, and also felt fortunate to have survived the war. When he returned from the war he was passed his prime. His best years were spent playing ball in the service. In 1943, nobody called him Losing Pitcher Mulcahy as he led his team with a 15-1 record on the way to winning the Southern Army Baseball Championship. The different ballplayers getting together to play ball was not only fun for the players involved it also helped keep up morale. It was not all fun and games for Mulcahy because in the end he was a soldier. He earned a bronze star and several other accolades before his days in the service came to an end.

In August of 1945 Mulcahy rejoined the Phillies. Not much had changed as the team would almost throw games away with defensive lapses. After only 16 appearances in 1946 he asked for and was granted his release by the team. He inked a deal to play with the Pittsburgh Pirates the following season but didn't make it through Spring training. He played a little bit of semi pro ball then finally hanging up his cleats in 1951. After he decided to step away from the game as a player he was hired by the Chicago White Sox to help young pitchers develop. He had done his fair share of helping his teammates throughout his career so this was a natural fit. He ran the White Sox training camp for many years and was even named the pitching coach for their major league club in 1970. In 1974, Mulcahy was recognized as the White Sox Man of the Year because of his work with pitchers as they were coming up within the organization. He retired after more than 20 years with the White Sox. He lived a quiet life, playing golf and enjoying his grandchildren until he passed away in 2001. The man lived with no regret, he appreciated his life and I really do think it makes his story a great one. I know I look at him as a war hero and that losing pitcher nickname means nothing.
Posted by Wade Forrester at 12:56 PM